According to the ranking made by the consulting firm Mercer in 2020, Bogota is one of the best cities ranked in point of cost-of-living. Its results are better than those of other appealing capitals such as Rio de Janeiro, Buenos Aires, and Mexico City.

On top of the above, Bogota is the city of Colombia with more universities and research centers as compared to the rest. It has an ample cultural offer represented in many museums, theaters, and libraries, spaces that have earned for it the nickname of the “South American Athens”.

The city ranked in position 55 in the 2018 Global Cities Index, and it is viewed as an Alpha-type global city by the Globalization and World Cities Study Team of the University of Loughborough (2018).

Bogota has also been recognized as the number one destination for doing business in South America by the World Travel Awards in 2020. It is also viewed as one of the top 5 pedestrian-friendly cities of the world by the study Pedestrian First 2018; and it has been selected as one of the cities of the world with many, many trees, according to the FAO (UN) and the Arbor Day Foundation 2021.

On the other hand, the World Economic Forum (WEF) highlighted Bogota as one of the top 5 cities of the world in point of promoting the usage of bicycles in the middle of the Covid-19 pandemic. Even though it already had 550 km of bicycling infrastructure, by March 2020 it had added 117 km to that infrastructure.

Bicycle as a means of transport: kilometers of bicycle ways in Latin American cities (2020) 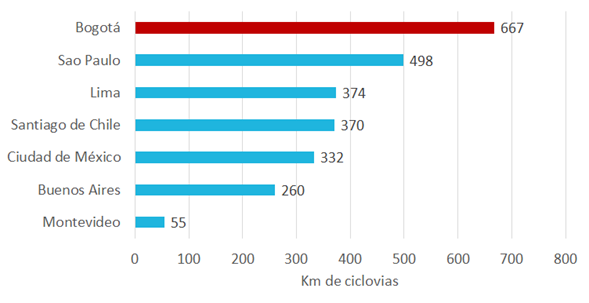 Bogota Region has the largest number of public parks and green areas as compared with the main cities of Latin America. It provides its inhabitants with more than 5000 entertainment spaces and locations across its 1.8 km² of area.